It’s our last day before we fly out of Kathmandu tomorrow, this morning we explored the “Garden of Dreams” – an amazing oasis of calm hidden in plain sight of the crazy hustle of the Kathmandu streets. I’m now writing this in the Hotel courtyard, contemplating not only the whole trip but also how unlikely it is I’ll be sat outside updating this blog anytime in the near future.

The route back from Base Camp, over the following four days, to Lukla where the journey began in earnest was very enjoyable – the weather held and some of the varied routes took us through stunning scenery. Further, being acclimatised to circa 5000M and having nine days hiking behind us meant the hiking and altitude felt less strained than on the way up.

Day 11, Kala Pattar then down to Lobuche 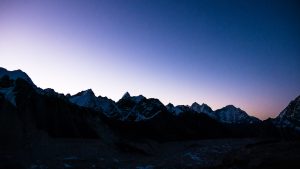 The day after EBC, everyone was feeling tired and some were feeling the effects of a cold which had hit our camp. Colds at altitude are definitely less fun than they are at sea level also. That morning we had the optional hike of going up a nearby mountain which is higher than EBC, the idea was to hike up – about 2/3 of the mountain to get a great view of the sunrise.

Sunrise is 6AM, so for those of us who chose to go on the trip agreed to meet at about 4.45AM. If we hiked for an hour we should be in a good place to see the sunrise over the mountains. To put in perspective how cold it was at that time, the jug in the barrel of water next to the toilet (to be used in place of a working flush) had frozen together preventing anyone from flushing the toilet until the ice melted. This was the one instance where I wore my down jacket, alongside top and bottom base layers and my soft shell fleece.

We started out with our head torches affixed, going up the mountain. As it approached 6AM the shimmy of the sun could be seen on the horizon. What we hadn’t accounted for was given how high the mountains are, how long it would take the sun to rise above them – particularly Everest. The point we’d reached at 6AM was my physical limit at that time, you don’t sleep particularly well at high altitude, especially with uncomfortable beds. The combination of the day before’s hike and lack of good sleep was a definite factor in my feeling at that point. I also wasn’t the only one feeling the pinch. To keep warm Pemba showed us a couple of ways to warm the extremities up and we ended up walking in small circles to keep warm. After about 30 minutes of this the sun had made little to no progress up the mountain so it was at this point we called it a day and trudged back to the relative warmth of the tea house and an early cuppa. It was at least an hour later we saw from the window the sun peak above the mountains, the few of us who’d gone up feeling our decision to come down ratified.

After breakfast we had a relatively short hike back down to Lobuche, though we didn’t lose much height – only a couple of hundred metres. The tea house was more comfortable and I had my first hot shower in several days. 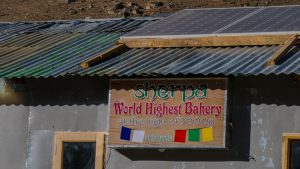 As we left Lobuche we passed the “World’s Highest Bakery” at the “hight” of 5000m. Unfortunately, I cannot report on what the bakery was like as we didn’t go in to try – maybe next time! As we continued the hike back down the valley in the morning we were able to spread out an not walk single file in a line as we had to do for much of the trek and everyone capitalized on the space to find their own pace. I tried to use the opportunity to get some front facing shots of people, I seemed to find myself at the back of the group most of the time as I stopped to take photos – meaning most of my shots of the group are of their backs!

In the afternoon we were back amongst the cliffs looking down on the river below with stunning scenery surrounding us. Once we reached Pengboche then it was time for celebrations with Beth celebrating her birthday in the Himalayas. We cracked open the first beers of the trip – hangovers at altitude are like the hangover after that Christmas party you would rather forget – best avoided, local ales don’t seem to exist but sharing a Sherpa lager wasn’t going to result in any complaints! Whenever tea houses had music in the background it was meditation type music, almost identical everywhere – supposed to lower your blood pressure. This time it was a little different though with the tea house lady deciding to put on some Billy Ray Cyrus and John Denver. Country Roads prompting a sing along much to her amusement.

We weren’t the only ones getting jolly that night though, Pemba met up with a friend (though in all honesty it felt like Pemba knew everyone in the mountains!) and came back after his friend had continued to pour “one more” Chang (local rice wine). Nick also shared a small bottle of whiskey he’d bought with the Yak driver, the gesture prompting a look of absolute sheer joy and even a little jig from the Yak driver.