Writing this in the restaurant/common area of Hotel Camp De Base, in Namche Bazar on day three of our climb down. It’s feeling ever closer to home, especially with a large Union Jack pinned to the corner of one of the walls with a picture of Kate and Wills in it.

On EBC day we had a relatively short elevation gain from Labouche, crossing the 5000M mark upto 5140M (240M) though the distance was further with the hike taking a few hours including a final slog over very rocky and undulating (current hot word, after Nick described something as flat and while it may not have been a mountain we argued it wasn’t flat!) terrain. We arrived for an early lunch and then after a short break, started at around 12.30 for Base Camp. 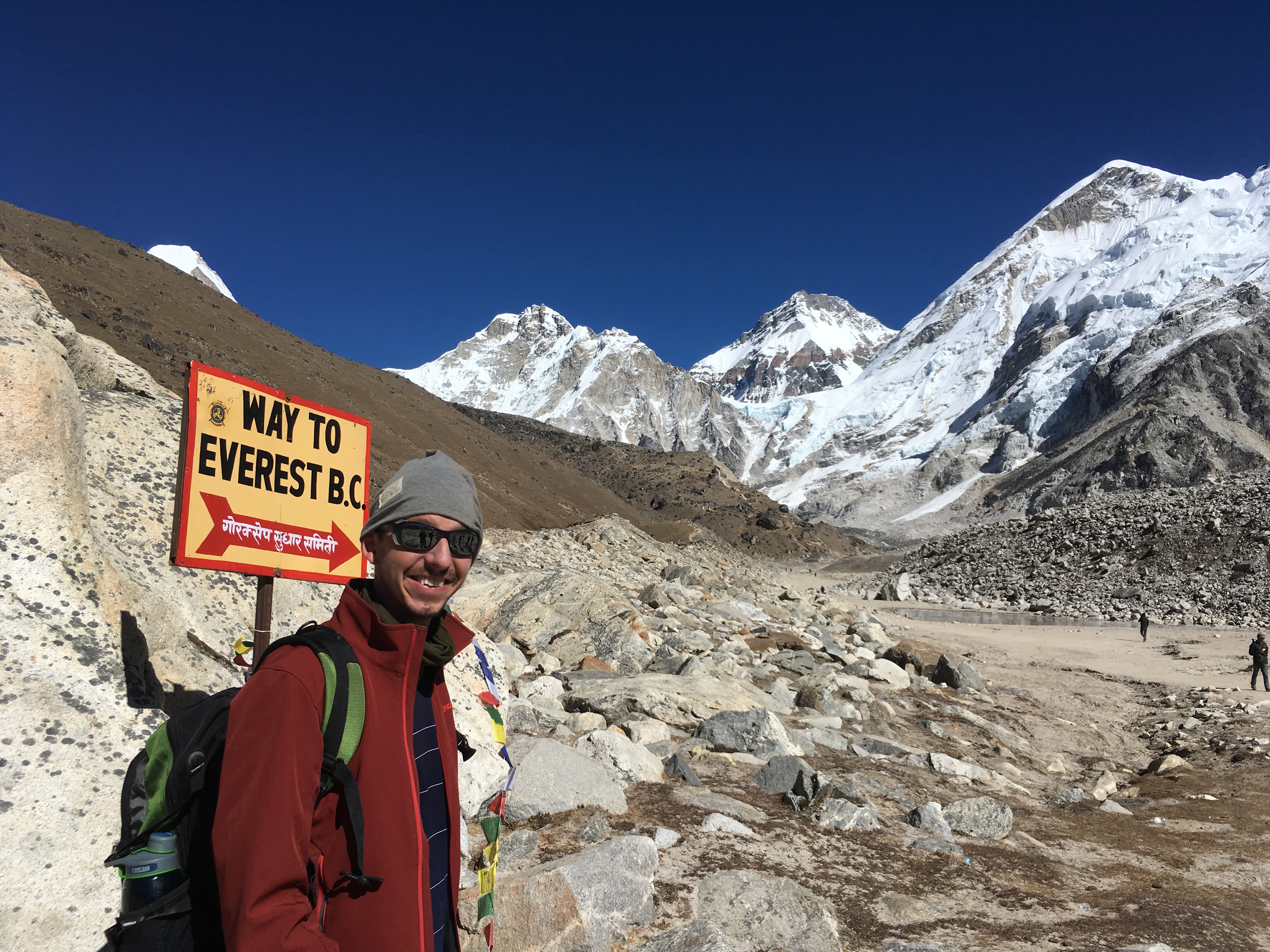 It started across a desert type plain, passing a frozen body of water which had a plastic bottle embedded within the ice allowing access to the water below. We also passed a sign, helpfully pointing the way to Everest Base Camp.

Soon we were on a rocky mountain path, working our way towards our aim destination. While it was cold it wasn’t freezing, I had only my top base layer on with a t-shirt and softshell fleece, my mid-weight walking trousers did the job fine. While I hadn’t worn my down jacket yet I thought I had it in my backpack, later I noticed I’d packed my sleeping bag instead – both stored in a similar looking bag.

As we neared Base Camp the glacier became ever more impressive and we got another look closer up of Everest itself. Unexpectedly, compared to other smaller mountains (only in relative terms, with several of the tallest mountains in the world in close proximity), Everest was often hidden from sight during our trek.

Base Camp itself we had been forewarned wasn’t hugely spectacular, and aside from the prayer flags and sign there wasn’t much to suggest this was worthy of much notice than many other places on our trip. However, it was extremely exhilarating since it had formed the goal of our journey. What was surprising was how small it was, Pemba told me how when they camp here they have to flatten out the stones to pitch the tents. With climbing season over for Everest till Spring the area was probably the equivalent of a slightly overgrown lawn – albeit one with great views around.

We spent I would guess around 20 minutes or so there, getting photos and wandering around. Amazingly for the last 5 minutes or so we were the only group there, a rather brilliant feeling of remoteness and achievement.

As I captioned the photo from EBC on Instagram it was a hugely exhausting day and challenging. The walk to Everest Base Camp from Gorak Sherp was probably tougher than people were expecting, while having also had a slug of a hike in the morning to get to Gorak Sherp had an impact. Most of all though I would say it was a cumulation of altitude, at over 5000 metres you can definitely feel the difference with all movements consuming more energy and generally feeling rougher while there was certainly some effect of having been hiking for 9 days.

As Nick has regularly pointed out, the pains and groans of getting there will soon be forgotten but the feeling having reached Base Camp will not be something to forget. I’ll write more about the way down but the trip has been incredible and there have been so many highlights aside from EBC itself. Although a 6.30AM breakfast tomorrow is I’ll admit not one of them!