¡Bienvenidos a México! Welcome to Mexico!

A few months ago I totted up my remaining vacation days for the year and found myself booking a trip to Central America. When on the Everest Base Camp hike a couple of years past we saw plenty of Intrepid groups so looking for a similar experience I ventured to their website. It was here I unearthed the Mayan Adventure which perfectly exhausted my remaining days (but luckily not me).

The trip would encompass three countries: Mexico, Belize and Guatemala, and as the name suggests, following the path of the Mayans.

The first stop was Mexico, landing in Cancun with very little Spanish skills (“una poquita” as I would later learn), I used my Spanglish to avoid paying over the odds and navigated my way to a shared minivan. Destination: Playa Del Carmen, the trip meeting point.

There were 10 of us in total in the group, several who had joined from another tour (Intrepid’s tours typically connect together so as one tour ends another begins, a 60 day tour for example is actually made up of three tours joined together). It was quite a melting point of people: Americans, Australians, Brits, South African, German’s, Italian (in the guise of an Austrian/German). Carpenter, mechanic, chef, trauma surgeon. We really represented quite a slice from the walk of life.

There wasn’t a lot of time that day for much aside from a walk around the area. The location itself didn’t offer much beyond a beach. That evening we all headed out for dinner, the first group dinner and a chance to get to know each other. It was the day after the Day of the Dead and the restaurant was very much on theme with various multi-colored skeletal decorations.

Day Two: Taste of the ruins

The second day started with a local coach to Tulum which would be our location for two days and the final stop in Mexico. Both days encompassed Mayan ruins. The first ruins were accessible by a 30 minute bike ride from our hotel (read: very basic accomodation). Our journey, however, was delayed. Before even 10 minutes had passed since hiring the bikes we were getting drenched by a tropical downpour. Having retreated to a bar, and after a few games of dominos the rain subsided and we were on our way to the Tulum ruins.

The bicycles were push bikes, where you had to peddle backwards to brake. Throughout the journey this resulted in several people riding into the back of each other as they reached for the non-existent brakes on the handlebar! The ruins were the first I’d seen and very impressive, built in the thirteenth century on top of a cliff. Below the ruins was a beach and a perfect chance to jump in and cool down. It presented a unique, imposing view looking back at the cliff top with the ruins on.

The following day was an early start and one of the highlights of the trip. The location: Chichen Itza, named one of the modern Seven Wonders of the World. We arrived just as it opened, avoiding the masses and getting one of the best tour guides to explain the history. Before the previous day I had no idea the Mayans had built pyramids (actually in general I knew very little about them) but the structures facing you defied the belief that they could be built so long ago and yet appear so sophisticated. From the position and the shapes and shadows formed by the sun at certain times of year to the ingenuity in amplifying sound acoustically, I was captivated by the sophistication.

After visiting Chichen Itza it was time for lunch, stopping at a local family. The mother is hoping to open a restaurant and Intrepid are supporting her by bringing groups for lunch (though a couple of other tours were arriving as we left). It was without doubt some of the best food on the trip and the best Mexican food I’ve ever had. We capped a very packed day off by stopping at a local Cenote (a freshwater sink hole you can swim in). It was another unique experience and we were only at the end of Day Three (Day Two proper).

The following day we made the trip across to Belize for the next part of the Mayan trail. 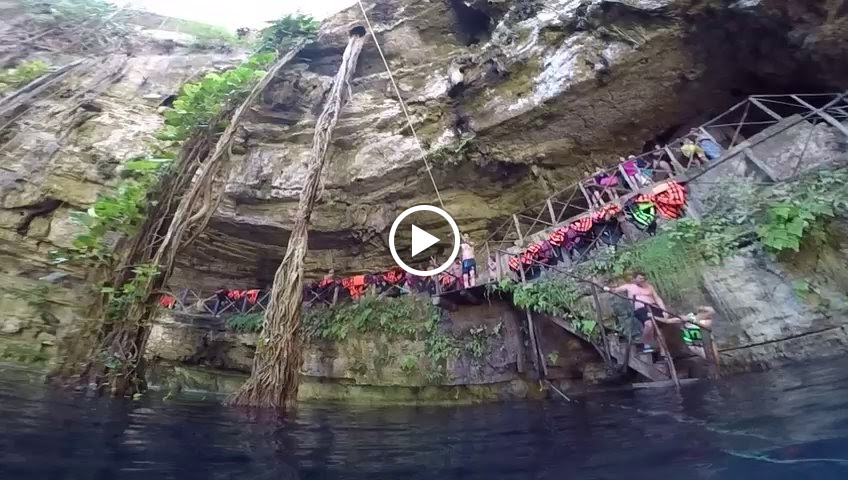 Above: Swinging into a cenote