It feels a lot longer ago but back in April Danielle and I took a Euro trip to Amsterdam, Munich and Salzburg. Our plan was to pack light enough to rely on carry-ons, a plan proposed by the shoe addict. The only carry-on suitcase I had wasn’t going to be enough so I had acquired a new suitcase after some careful searching on the maximum dimensions for carry on. Sorted.

KLMs online check-in wasn’t working for us, so at the airport we had to go to the check in desk. The woman at the desk, took an exceedingly long time and a lot of tapping. Eventually she informed us* we were over the combined weight-limit (hidden far down in the policies apparently, having only checked the dimensions) and had to check our luggage in.

The plane itself was part cargo/part passenger so the seating ended much sooner than you would normally expect. Whether because of this or not, but the leg room was the worst I’ve ever experienced. Seriously, comparable to a budget flight from London to Dublin. Any less leg room and my legs would have had to take the next flight.

Once off the plane, it was relatively straightforward to get to Centraal Station and our hotel – the “A-Train Hotel”. The reviews of A-Train Hotel were excellent though left us wondering what we might find, with odd sized rooms, apparently, a feature of Amsterdam. While the room was on the small side, it was a great and friendly little hotel which formed the perfect base for our explorations. If you’re looking for where to stay in Amsterdam and don’t mind simple facilities then for the location it’s definitely worth checking out.

Amsterdam is a small city, but through the walking, cycling and canaling/boating (what’s the right term?!) mixed with great weather, it didn’t matter. Simply exploring the surroundings through each of these modes offered a new lens for the city.

The day we arrived we followed our feet to Jordaan, which became one of our favorite areas. Think Notting Hill or the West Village: art galleries, cafes, mazy streets, markets.

Over the next couple of days we got a 24 hour hop-on-hop-off canal pass, given how famous the canals are it seemed essential to take a trip. It also was a great way to do some sightseeing and scout out areas to explore further. We had an amazing guide who provided fantastic commentary on one of the occasions. From trivia such as how the city got it’s name: built around a dam in the Amstel river to fun facts about drunks sleeping  in their cars overnight and opening the door the next morning and falling in.

On our last day we hired a couple of bikes – through the amazing Donkey App (similar-ish to Boris Bikes or Citi Bikes, but without the docking stations – the bikes are unlocked and paid for through an app, the downside they have to be returned to the same location) and found our way back to the area. 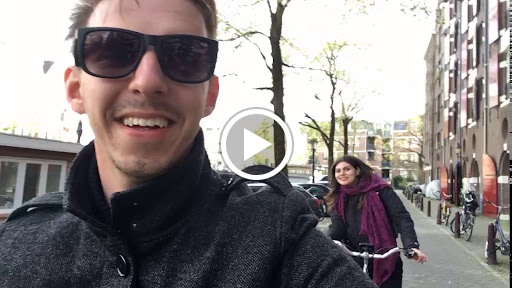 Aside from the general exploration and boats and bikes, there were three major tourist attractions we did – Anne Frank museum, Heineken Experience and the Tulip Fields at Keukenhof. Each very different from the other but all worthwhile.

The Anne Frank house was a lot more engaging than I imagined it might be, the story was told through handheld headsets and being in the different rooms and walking through the house you got a real sense for the life they lived during the war.

The Heineken Experience reminded me of the Guinness Factory, though while the latter takes you on a journey of the company – from the start, through marketing, distribution and production etc. the Heineken Experience was more of a journey of the brewing – including at one point where YOU become the hops and are treated to a bumpy and wet journey on your way to becoming a beer. 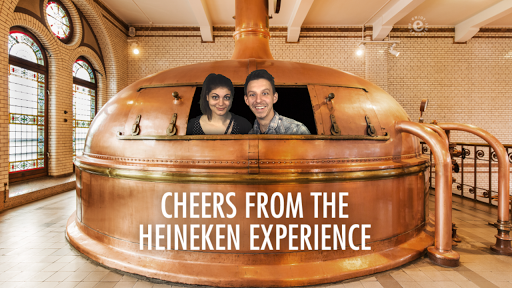 To get to Keukenhof we had to take the train back to the airport and then a bus. We made an early start on a weekday, thinking A) We were amongst the very few people who would ever think to go to Amsterdam as a tourist B) Getting up at 9am was early C) How popular could tulips be? The series of assumptions were a little off the mark, arriving at the bus station we were greeted by an ever-growing line and buses which appeared to have found inspiration from KLM in how many people you can fit into public transport. Never-the-less, the tulip fields, which were more of a tulip garden were fantastic and it was a lot of fun wandering around and great for photo opportunities too (though honestly all of Amsterdam was) and well worth the trip.

I’m going to write a couple more blogposts on Munich, Salzburg and the food/drink in particular during our holiday. Overall though, Amsterdam had so much more to it than I think either of us was expecting and is one of those places which feels eminently livable as a resident as much as it was a great holiday destination.

*And in all transparency, my camera gear took me over the weight limit – not just Danielle’s shoes!