Torquay, some may recognize the name as a seaside town in Devon, England. It also happens to be the name of a small town near Melbourne, population of only 10,000 with significant surfing heritage. Two of the biggest surfwear companies RipCurl and Quicksilver were both founded in the town.

On this occasion, as we got out of the van and climbed over the ridge to face the sea, we were not here to surf. Torquay is also known as the Gateway to the Great Ocean Road and this was the order of the day. Indeed, we were not carrying surfboards but rather a cup of tea, as we made the first stop for morning tea and cake. I had joined a tour run by a local company “Go West”, we were going to travel the Great Ocean Road making several stops along the way and then returning express in the evening.

Along the way our driver pr 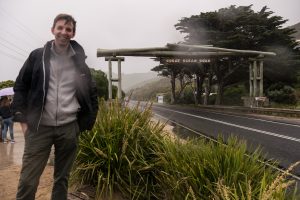 ovided commentary on the Great Ocean Road and the various stops, it was here that I learned what I mentioned in the previous blogpost about “4 seasons in one day”. No sooner had we had got on our way after breakfast then we were met by monsoon-esque weather making for a rainy photo stop at the Great Ocean Road gateway sign. Alongside the commentary we had a playlist in the minivan with a song for every step of the journey and soon enough we were on the ‘bright side of the road”, and what a road. 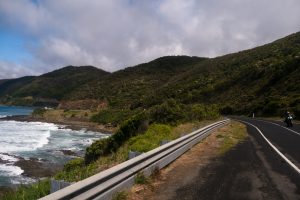 The lunch stop was Koala Kafe at Kennett River, not only serving up the food but some koala spotting – even if the koalas were all nestled asleep at the top of the trees. The stop also provided the opportunity to get up close and personal with some birds and a chance to get to know some of the other people on the tour.

Soon enough we were on our way again, diverging inland to a rainforest for a scenic wander. From there it was onwards to the posterchild of the tour, the Twelve Apostles – a collection of limestone stacks. As we learnt however, there are not 12 stacks only 9 and they were originally called “Sow and Piglets” receiving a name change when the tourist board wanted something more inviting/catchy!

As stunning as the Twelve Apostles were, at least equally as stunning was Loch Ard Gorge, only a few minutes down the road. Named after the shipwreck of the Loch Ard, a ship coming from England with only two survivors but a really interesting story..

The Great Ocean Road was undoubtedly the highlight of Melbourne and quite possibly even the whole trip itself.  That was not only due to the scenery but the tour organization itself too.  A couple of days later I was back on another tour with the same company heading to the Grampians National Park.

This trip was quite different with more time driving, however it did provide the chance to get some hikes and waterfalls in.  One of the first hikes was Halls Gap via the Grand Canyon, admittedly I didn’t think the first time I saw the Grand Canyon it would be in Australia, but the views were never-the-less stunning.

The final hike of the day was to Mackenzie Falls, the walk took us down to a lookout over the waterfall and then a further walk to the base of the circa 100ft waterfall.

As we journeyed back from the Grampians we made one stop at an another incredible view point before continuing to wind our way down the mountains. Throughout the region there was evidence of brushfires, something we also saw parts of on the Great Ocean Road, it was eye opening how severe it must have been in parts though we were reminded of the benefits the fire brings also.

On the journey down we were startled as a wallaby crossed the road right in front of our bus, our driver and guide recalled a time he had an even closer encounter with a kangaroo, which he thought was going to be lights out. Thankfully for him the kangaroo hopped just in time out of the way. We ourselves got a chance to meet some kangaroos, also up close and personal though thankfully in a setting presenting less danger. It’s well known Aussie’s love their cricket, what I didn’t realize was the passion for the sport was shared amongst these marsupials. We stopped at a local cricket pitch before coming back to Melbourne and sharing the pitch, though more so it seemed as spectators, were at least a dozen or so ‘roos.  I would get closer to a kangaroo another time, though that would be on a plate in a café in Sydney..