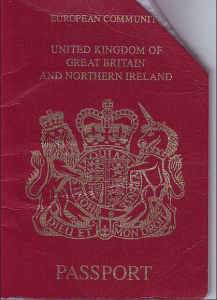 I’ve just been told to cut to the chase and start blogging about New York rather than events leading up to it.  However, I still feel there are some stories left to tell  and it’s the journey to New York that inspired me to start a blog. The point the people/persons made was that I should blog about New York while it’s fresh in my mind. Yet when people write autobiographies do they not recall historical events? You can also follow me on Twitter, Facebook or Instagram for ‘live’ updates while I finish blogging about how I got to New York.  Things should start to get interesting now though.

It was the 10th of April when I accepted the offer. You’re given an opportunity for a sponsored relocation to New York and a promotion. What happens if you don”t take it? It was that feeling of ‘what if’ that was a big factor in driving me here. Accepting the offer was the start of a lot of paperwork…

The week after I accepted I was up in Manchester again, to see The Augustines – genuinely one of the best gigs I’ve ever seen. Their live performances are incredible. They did one song completely unplugged on stage which required the whole audience to be very silent. Then most of their encore was spent singing in the middle of the crowd.. . Seriously hard to describe how good that gig was.

It did lead to a certain hangover though, something I pointed out to a certain colleague (who shall remain anonymous as I don’t want to implicate him). Yet, sometimes you have to make sacrifices for team members especially on their birthday. So it was agreed, with Axelle and Pierre’s birthdays and a bank holiday the following day it would be inexcusable not to have some drink that night.

It was an excellent night. There was one point when Laura and I went upto the bar to get a round in. Those who have worked with both of us before in the same team will know what we’re like. We got to the bar and tried to order Axelle some sort of champagne cocktail. The barman would only serve a belleni however. Yet Laura and I both ended up arguing over who would pay for the drink for the birthday girl. I think we mentioned it was Axelle’s birthday. The barman was getting suitably annoyed at our unwillingness to let one or the other pay. In the end he put it on the house because neither Laura or I were backing down! It did mean no one else we were supposed to be getting a drink for got a drink but small issues!

Most people in the team didn’t realise (I like how now I’m in New York the spelllcheck is trying to change this to ‘realize’) I’d accepted the New York offer yet and I remember being asked by someone specifically what was happening with that offer. It was one of those times when you were enjoying the time/moment that it felt like it would be a shame to mention I’d accepted the offer so it kind of just got passed off. I got a lot of stick later when  I thought everyone knew but turned out they didn’t and a couple of people found out indirectly!

The bank holiday was spent in Oxfordshire, with a very country weekend – farm shops and the Point to Point. Very very English things that I haven’t had a chance to miss yet but surely will when Easter rolls back round next year.

Back in the serious stuff I’d realised my passport was going to expire in May this year. Something that wouldn’t be very conducive to moving to America. I’d left it a bit late so I had to use the premium ‘next day’ service to get my passport. This involved an appointment at the passport office on the last Sunday of April to submit my application, to get it on Monday.

Now it’s common knowledge that there is a legal obligation for passport photos to be the most awful photos of you possible. Therefore I was very pleasantly surprised when I went to get my passport photo on the Saturday it came out really well. I got my photo at just one of the standard photo boots in St Pancras station. I’d gone there ill-prepared with only a £20 note which I didn’t think the passport machine would take. So I used one of the change machines outside the booth to give me change. Putting the note in and getting 20 pound coins in change drew quite a lot of attention to me and the change seemed to just keep on coming..it was very much like winning on a slot machine and I could see everyone’s eyes turn to me. Almost like ”Has he just found a way to cheat the machine out of change?’. It turns out the booth took notes!

I’d agreed to meet up with Rob later that night to watch the football. Man Utd vs Norwich. What was supposed to be a casual couple of drinks and a game turned into so much more. At somepoint during the match it was decided beers were too heavy so switched to a mixer. I think this might have been where it went wrong. Or possibly when we decided to stick on after the Man Utd match and watch the Real Madrid match, with a couple more drinks. After that finished Mr Kingdom suggested we could go somewhere else Nothing else planned for the Saturday night for either of us so we just went with it.

Ended up in a bar, with a bunch of girls on a hen-do dressed in cops and robbers costumes. I’m laughing as I type this as Rob was wearing a black and white striped shirt as if it had all been perfectly planned (it honestly hadn’t). However queue more drinks and much chatter. It turned out the girls were going on to Club De Fromage later which had a cops and robbers theme. We decided it would be a good place to go. Unfortunately by this point we were both fairly well…watered. We twice got turned away by the bouncer from the club. The first time it was me (trying to get in while leaning on the railing to stay vertical clearly isn’t the level of sobriety required by the club). Second time, after a stop off in McDonalds  (at the suggestion of the bouncer. I had a cup of tea to try and sober up), Rob got turned away. At this point we went to McDonalds again and started talking to an Irish bloke. At somepoint I apparently stood up, announced I had an appointment at the Passport office tomorrow morning (10..30am) and left abruptly. Rob realised at this point he’d lost his wallet and dragged this random Irish bloke around Angel looking for it with no success.

I woke up the next morning, fully clothed, on top of my bed with quite a headache. Checked the time and swore quite loudly. I was supposed to be in Victoria in about 30 minutes time.  I honestly don’t think I’ve ever got out of bed or brushed my teeth faster. I pegged it down the stairs and was just out of my building when I realised I’d left my old passport in the flat (which I needed at the appointment). Back up stairs, collected it. Ran back out. For the most part of this my housemate is making his breakfast I still have no idea what he thought was going on with me. I had about 15-20 minutes to get from Holloway Road (North London) to Victoria (South London).  I decided to cab it. Of all the times it was this time that the cab company decided to be super chilled and casual about it all. It took them ages to get up from their seat to even talk to me. Then the actual cab took ages to arrive (or at least it felt). Never before or since have I told a taxi driver “If you can, can you go as fast as you can and I’ll tip you more”. Even more infuriating was he didn’t take card so we had to make 2 stops for me to get cash (first cashpoint was out of order!). During this ride I’ve never cursed myself as much as  I did!

I got to the passport office and luckily the appointment times weren’t too strict as I was about 20 minutes late. Got to the counter handed everything over I had in files. Then the woman behind the counter asked me for my photos, my first response was that they should be in the files I gave her. They weren’t. I double and triple checked my bag. Nope they weren’t there. The woman told me I would have to go to the cashier window, where they had ‘No obligation to give you change” and use the passport machines in the lobby to get new photos. I did so, but the machines chairs were so bad they didn’t go low enough for me to comfortably get my head in the frame. I had to slouch and try and look as un-hungover as possible. So now my passport photo is of a hungover, stressed me, rather than the much better photo I’d got the previous day. Suitable reminder not to drink so much I think! At least I got my passport though, seeing the widely reported issue around backlog I consider myself a bit lucky as well…