For the first time I can write this post from the comfort of my own apartment, having finally got internet installed in my apartment. As with most things so far there is a story attached to this which in good time I will get to. For now I will continue to document the journey here. Although the feature of this post will actually be New York..

Having agreed and accepted the offer to move to New York, part of the agreement was to take a trip out beforehand to view the office and generally have an idea of what I was moving to! I had never been to New York, let alone America before, so I really wanted to have a feel for it before moving.

It was a really awesome trip and I definitely left feeling even happier about my choice than beforehand. This was back in May, so before the New York summer hit  but definitely warm enough to feel like an upgrade on England.

The flight over was also the longest flight I’d ever been on, although I definitely got lucky with the journey. The plane was far from full, I presume due to flying at an unusual time mid-week. I was situated in the aisle and had 3 seats to my own, a luxury I’ve never had before or since! The service for the flight was great, (plug to Delta)  never have I been so catered for. I felt like a turkey being plumped for thanksgiving, every time I had finished what had been offered to me then out came something else.

The hotel I was staying at, The Marcel, was located in great distance from the office – offering a great base to explore the city from. Also a chance to get a taste for living in Manhattan.

I arrived on the Wednesday and flew back on the red eye on Sunday night.  This gave me the chance to spend a couple of days in the office, meet the team while also enjoying some of the sights and smells of New York itself.

On the subject of smells, this was one of the first things that hit me. Rather than taking a taxi from JFK I took the subway out to Union Square and then walked. New York is a big city and not necessarily the cleanest all the time. Walking to my hotel and seeing all the garbage bags out on the street and the smell associated with them was definitely a shocker. You still notice it from time to time now, though you definitely get used to it.

Judy, my now manager, was the only person I knew in New York when I first moved and for that reason obviously played a part in persuading me to come over here. She was kind enough to show me around some of the different parts of New York. So here goes a brief recap of some of those highlights coupled with my own discoveries/observations, in no particular order:

Sake. My first taste of Sake came at a cool Asian restaurant – Momofuku Ssäm bar. Great food, great service. When we’d finished our meal the waitress needed the table so offered us a free beer each if we moved to the bar. I’ll take that.

Williamsburg. The best way to describe Williamsburg is to say it’s the Hoxton or maybe Shoreditch of New York. Great bar scene. Full of hipsters (which on a side note, Glenn, one of the Analysts in the office described me as and said for that reason I should live there!). I would say one of the best bars I’ve been to,  ever, was here. Brooklyn Surf Bar. 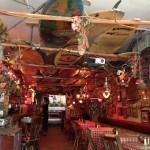 This as you may have noticed, inspired the title of this post (you’ll notice the song references Manhattan, also the lyrics “We can’t wait for June”. Although start dates were far from arranged this was a rough month everyone had in mind for the move. I  was also definitely looking forward to it once I started tasting New York). The bar itself lives up to its name: the floor is covered in sand, Hawaii-esque decorations everywhere, surf boards on the ceiling.

The best  iced cocktails as well.

The Grid System. I loved it. I love it. I can’t think of living without it. Looking straight down the long streets and seeing such amazing uninterrupted views. I say I can’t think of living without it, that’s true of New York. I enjoy the maze of roads in London. It’s just what works best for each city. As a tourist/new comer, the grid system makes life so much easier though. So long as you memorize the cross-streets for where you are and need to get then no need for a map! 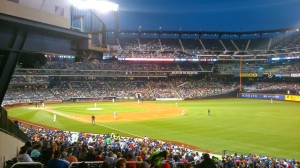 Baseball, or more specifically the accessibility of. You’re not going to convert me from football, no matter how hard Man Utd might be trying in recent times.  Being able to turn up, buy tickets on the gate (at least for the Mets), enjoy witnessing a sport in good weather. More often than not, every football game I went to in England was in miserable weather conditions. It was nice to watch some sport without wearing several hundred layers. Additionally, worth mentioning, soaking in the fact it is so American. “Hot dogs, hot dogs!”. I don’t mind that though.

Hill County BBQ. This was the Friday evening, a couple of us went to this… I guess you have to call it…institution. Maybe slight exaggeration. But this is serious BBQ food and who doesn’t like a BBQ? It is entirely possible though to accidentally eat your body weight in meat. One recommendation to avoid this is to start small and go back for more! (insert self control here). It’s a market-style restaurant, you order your food by weight. 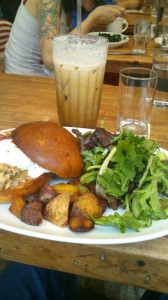 Alphabet City, Northern Spy Co., Big Gay Ice Cream, Tomkins Square Park. The last day in the USA was spent with a couple of people from the office, incidentally neither of which were American (Irish and English).  A really worthwhile part of the trip for me was to get an understanding of where I’d like to live when I moved here. Alphabet City was described to me as the Angel (for those non-Londoners, I am referring to an area of North London, I’m not describing any specific angelic qualities of the area) of New York.

Therefore Alphabet City (named so since it is located across avenues A,B,C and D) was the destination for the last day. Check the area out. Grab brunch (at the great Northern Spy co.). Check  more of the area out.

The latter checking of the area out led to the incredible (both in name and product) Big Gay Ice Cream.  A subsequent purchase necessitated the placement of posteriors in the park to provide some peacefulness to enjoy the more than palatable previously promoted picnic (though it was polished off rather quickly).

On slightly more serious note, the purpose of this blog isn’t (thankfully) to show off my journalistic skills. Yet I do feel I should provide some balance to this post. So here are a couple of things that weren’t absolutely great.

How do you flush out all of those tourists?  Tropical style rain storms. One minute you’re enjoying the sun and heat. The next minute you’re sheltering under the nearest Duane Reade. This caught me off guard at least once. I’m quietly going about my business being a tourist and suddenly either  I’m one of the few people who hasn’t gone out prepared with an umbrella or I have an umbrella with the hotel name brandished all over it. My efforts to blend in foiled by the weather (we’re going to ignore the very English accent right now).

I was recently randomly asked something along the lines of, “Do you know what  you’d do with a pencil and a cassette?”. I mention this now as the title of this blogpost reminds me that Beach Boys ‘Golden Greats’ was one of the first albums (maybe the first) I ever owned and at the time “Surfin’ USA” was my favourite song. No need for a pencil now though.

I’ve had to update the first post I made and the sub-title of the blog. It has come to my attention there is another Sam Fox I had not accounted for. Any other sightings of other Sam Fox’s please drop me a line/leave a comment.