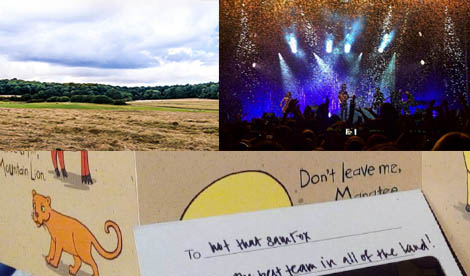 174 days. The number of days that have passed since I last posted a blog update. During that time, a lot has happened including turning twenty-nine. As I contemplate retirement and with it hearing aids, Zimmer frames and taking 10 minutes to usher food from my fork to my mouth, I felt it was the right time to prove I’m not completely gone by updating this blog.

The best place to start is probably on the subject of gigs. In my last post I said “watch this space” given I had just acquired tickets to Bruce Springsteen. It was a fantastic gig and I’m in fact seeing him again later this month. But most recently I saw the Lumineers, a brilliant birthday present from Danielle (alongside a day upstate trying knish and pastrami – excellent also!), and definitely one of the best gigs I’ve seen in New York.

The concert itself was part of a music festival, called Speed of Sound, its inaugural event last year was in celebration of 50 years since the beginning of Woodstock. It was a small one-day festival and there were tell-tale signs it was still in its infancy – with beer lines becoming 30-45 minutes long, taps running out of water and long waits to get out of the car park. Bandage fixes were provided – a golf buggy, seemingly official, turned up selling beer cans out of the back, staff were running around with bottles of water for people to use to wash their hands with and suddenly more staff appeared to help ease the traffic jam at the end. It didn’t really detract from the festival experience and I’ve seen similar things at festivals in the UK and inevitably they were non-issues in subsequent years. It’ll be interesting to see how this festival grows.

The same week as my birthday I also started a new job, it had been five and a half years since I started as a Junior Analyst in London working for ZAAZ. Never crossed my mind then that five and a half years later I’d be in New York. But five and a half years is a good stint and it was time for a new challenge. Those five and a half years brought some great experience, friends and memories. Just a few of the highlights – organizing a mock/nerdy themed wedding, a sports day in Regents Park (including potato and plastic spoon race and sack race using mailroom bags) and a Hawaiian themed honeymoon party – which is better to not go into details about! I left a great team at POSSIBLE – coming back from my trip to London to find my entire desk and all objects on it wrapped in cling film, a great leaving card and gift (more on that later) and obviously picklebacks (Mum – if you’re reading this, picklebacks are these great soft drinks we have in America). My new team looks to have good potential though, with two nights out in two weeks and coming in the day after my birthday to find my chair decorated with balloons to look like the Iron Throne from GoT – excellent signs.

As alluded to previously, I recently made a trip back to London and this is also connected to the leaving present I received from the POSSIBLE team (a gift card for a sports shop in the city). Earlier this year, a friend from a job pre-POSSIBLE/ZAAZ, 1000heads, asked if I would be interested in hiking to Everest Base Camp. In similar vein to some of the best things that have happened, I thought “why not?”. The primary reason for my recent trip back to London was to meet up with the rest of the group who will be doing the hike with me. While the walk we did was incomparable to what I imagine Everest will be like, in particular the lack of pub stops on Everest, it was great to meet everyone before landing in Nepal.  I fly on November 11th and fly back on the 29th, I am hoping I will be able to update this blog and Instagram during the journey – so keep your eye out! In the meantime, the next thing I need to do, before it’s too late is start on my thirty before thirty list, fingers crossed all goes well and I can tick Everest Base Camp off that list! Any suggestions for the list, let me know…