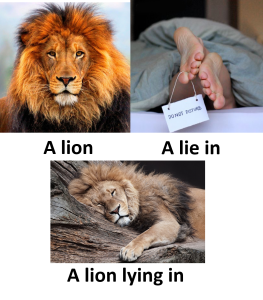 I wrote a couple of weeks ago about some of the words I’ve come to discover don’t actually exist over here in America. The words I shared previously were not the exhaustive list of words which existed on my post-it note, for that matter just today I found an additional two words/phrases which don’t work.

Continuing on from Gherkin and onto L..

Lie in – Something I love, yet when I described it I was met with that ‘look’. Some of my Clients have come to the knowledge of this word and sarcastically mocked it. For any Americans unfamiliar with this word it means to ‘sleep in’. Not to be confused, when said or heard in a British accent, with ‘lying’ or ‘lion’. “You had a lion?” – that’s a true quote by the way.

Lift – Perhaps an obvious one but I’ve got caught out a couple of times when I should be using the word ‘elevator’. Someone once tried to argue the case for the word ‘elevator’ over  ‘lift’, emphasis on tried. The argument put forward was the the word ‘lift’ only implies an upward movement, which isn’t descriptive of the actual capability or functionality of a ‘lift’..I proceeded to point out the flaw in this argument..

Nought – As an Analyst you obviously deal a lot in numbers, it’s hugely important to ensure you communicate the numbers effectively. Therefore there was much confusion when this word came up. Play this scenario out as I ask a team member, Halina, to write a number on the white board

Router – There I am in BestBuy trying to buy a router. That is, I’m asking for a roo-ter. The assistant clearly has no idea what the hell I’m asking for, cue me describing “you know..internet box with aerials, for wifi, um” (obviously complete with hand gestures). Eureka, “Oh! You mean RAU-TER”.

Tuna – Controversial but backed up by an English colleague in New York. When I first came over here I asked for a “tuna and cheese bagel”. What I actually got back varied. Sometimes I got a blank look returned or a confused response “what and cheese?”. More than once I just got back a cheese bagel. Lesson here is don’t say ‘tu-na’ but rather “too-na”.  To add to this, when I’ve told this story to American’s not only do I get the “of course it’s “too-na” but I also sometimes get “too-na on a bagel?!”. Sometimes it’s more than just the language..

Then just today I accidentally stumbled upon two more phrases. “Under the cosh”, as in under pressure or very busy, received a “what does that mean?”. A quick poll of the office revealed no one knew what this meant, though that also included an English colleague. Any thoughts? Finally from today, “pedestal” – as in small filing cabinet on wheels. Over here can only be used in reference to a plinth or when referring to putting someone on a pedestal. There was much confusion when asking Ray our IT Manager, if he had the key to a pedestal. His very confused look makes more sense now.

Again anymore suggestions welcome, some great inputs previously suggested included Aubergine (Eggplant), Courgette (Zucchini) and Coriander (Cilantro). I’ll be sure to update this in a few months as if today is anything to go by I haven’t completely mastered this American language yet.